The end of the word as we know it? 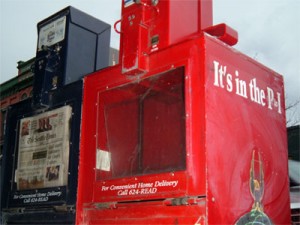 GM’s bankruptcy is the big business story of the week. But we all know a lot of other industries are suffering, too. In Ottawa today, thousands of unionized forestry workers from across Canada demonstrated on Parliament Hill, demanding the government do more to support their industry. Add newspapers to the list. The Newspaper Association of America reported today that U.S. newspaper print advertising sales plunged 30 per cent in the first three months of the year, the biggest quarterly decline in at least 38 years. Ad revenue fell $2.5-billion (U.S.) to $5.92-billion during the same period last year. Is another bailout in the works? Probably not. People are fed up with politicians throwing obscene amounts of their tax money at moribund industries. Not only that, but accepting government money would completely undermine the notion of journalistic integrity, some industry leaders say. “That is so clearly contrary to what our role is as a watchdog that it’s just not acceptable,” Tom Fiedler, the dean of Boston University’s College of Communication and the former editor of the Miami Herald told Reuters this week. Instead, the report said, publishers are looking for changes to antitrust law, tax breaks and, for some, the leeway to convert their business into nonprofit companies. So far, Canadian newspapers have fared a bit better than their U.S. counterparts. But the shakeout is far from over. Canwest Global’s newspaper division, which includes the National Post and 11 other big city dailies, missed a $10 million interest payment last Friday. It’s survival seems in question. For writers, editors and publishers, these are interesting times indeed.