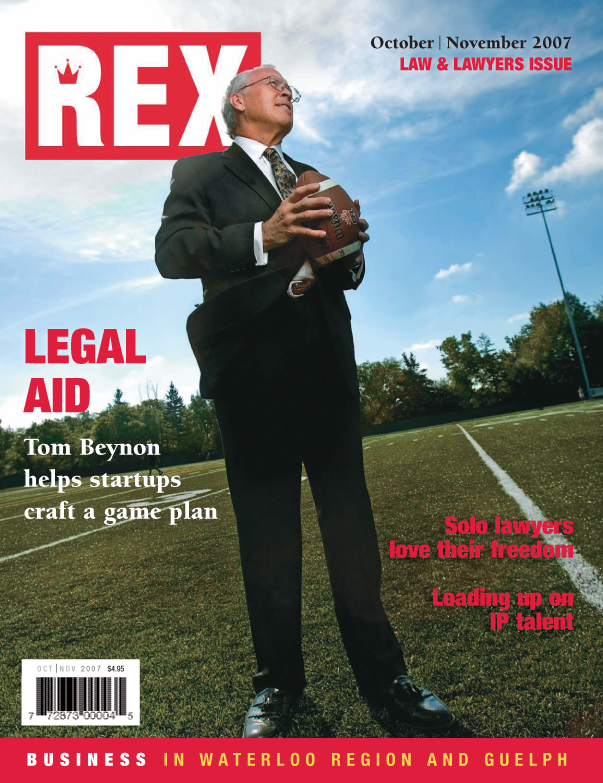 As a boy, he remembers walking the floor of the old Beatty Brothers foundry in Fergus, gazing with wonder at the way things worked. Maybe that’s how Jayson Myers, recently named the president of Canadian Manufacturers and Exporters (CME), the country’s largest industry association, developed his fascination for the forces that help power a nation’s economy. Manufacturing was in his blood. Both his father and maternal grandfather worked for Beatty Brothers, which grew to become the largest farm implement and appliance maker in the British Empire.

But instead of his hands, Myers used his mind to explore the inner workings of the economy and politics. As an undergrad at Queen’s University, he took a year to study at the London School of Economics, sharing classes with the likes of Robert Kennedy Jr. and Benazir Bhutto. He went on to the University of British Columbia, where he completed a master’s degree in international relations. At UBC, he won a Commonwealth Scholarship to study economics and politics at Oxford where, in his first year alone, he met former British prime ministers Harold Wilson, Edward Heath, and Margaret Thatcher. “All these great people would come in for dinner every Tuesday night,” he remembers, still amazed. “It was kind of neat for a kid from Fergus.”

Now, as CME president, the kid from Fergus faces perhaps his greatest challenge ever – helping to turn around Canada’s ailing manufacturing sector. Myers, 50, is under no illusions. “I couldn’t have come into the position at a more challenging time,” he says during an interview in his Mississauga office. “I think manufacturing will continue to be a very important part of Ontario’s economy, but it’s not going to be business as usual.”

Myers should know. Few Canadians have a better handle on the issues facing the country’s manufacturers and exporters, who are often one and the same. Even before he returned to Canada from Britain in 1987, he wrote analysis pieces on Canadian issues for Oxford Analytica, the Oxford-based research and consulting firm. Back on home turf, he worked for four years with well-known author and consultant Nuala Beck, an Oxford Analytica associate, before joining what was then known as the Canadian Manufacturers Association as chief economist.

In 1996, the organization amalgamated with the Canadian Exporters’ Association, and Myers was promoted to chief economist and senior vice-president. The Canadian arm of Watson Wyatt, a global consulting firm, recognized him in 2001 as the most accurate economic forecaster in Canada. In August, Myers replaced Perrin Beatty, former Guelph-area MP and scion of the Beatty manufacturing empire, as CME president. Myers also serves as chair of the Canadian Manufacturing Coalition, an alliance of more than 20 industry associations, which he helped establish last year.

In his new role, he expects to be travelling about 200 days a year, including two days a week in CME’s Ottawa office. But the peripatetic Myers still values his Wellington County roots. He now makes his home in Guelph with wife Sandra, a successful business analyst and IT consultant whom Myers calls his biggest inspiration. “I couldn’t keep such a hectic lifestyle without her support.”

Looking over a 16-year career with CME, Myers says one of his greatest accomplishments was leading an extensive consultation process on the future of Canadian manufacturing. Dubbed Manufacturing 20/20, the project was launched in 2004 and involved 98 meetings across Canada. Beatty, Myers and other CME officials heard from about 3,500 company executives, labour leaders, politicians, educators, and workers. The process concluded in 2005 with a national summit on manufacturing in Ottawa attended by about 800 people, including then-prime minister Paul Martin and provincial ministers of industry.

Through hundreds of hours of presentations and discussions, the participants painted a compelling picture of the challenges that face Canadian manufacturers. It’s a daunting list that includes Canada’s soaring dollar, China’s rapid rise as an industrial superpower, and intensifying competition from around the globe. Add to that escalating business costs, the aging workforce, and trade and border problems with the United States. Speakers also sounded the alarm about crumbling infrastructure, and increasing constraints on the supply of energy. In recent months, the ripple effect of a weakening U.S. economy has added yet another worry.

In the past three years, Myers says, these sweeping changes contributed to the loss of 280,000 jobs in the sector, 190,000 of them in the manufacturing heartland of Ontario. Guelph has not gone unscathed. Last year alone, the ABB Group closed its transformer plant on Woodlawn Road, putting 300 people out of work. And just down the street, Imperial Tobacco cut another 555 jobs when it closed Canada’s largest tobacco plant, moving production to Mexico’s low-wage economy.

Myers believes the most critical issue for manufacturers right now is the Canadian dollar. The high-flying loonie is putting huge pressure on companies’ cash flow and profit, he says, limiting the amount they can invest in workers and equipment. Governments need to find ways to help companies compensate, he says. “A 50 per cent rise in the dollar is like a 50 per cent cut in your export sales,” Myers says. “Companies are very hard pressed. But figuring out the issues – that’s the easy stuff. The hard part is to do something about it.”

Through its Manufacturing 20/20 initiative, CME has identified seven critical factors for success, beginning with strong leadership from governments and manufacturers themselves. Myers says companies, politicians and educators also need to work together to ensure that workers have the right skills and regard manufacturing as an attractive career option. Canadian companies must set the benchmark for innovation, and must have the capacity to operate on a global scale. That includes secure and efficient access to the U.S. market, says Myers. To succeed, he adds, Canadian manufacturers also need high-quality, cost-effective business and financial services, excellent infrastructure, and a tax and regulatory structure that promotes growth. All of CME’s efforts in the coming years, he says, will be aligned with those success factors.

One of Myers’ challenges will be convincing hard-headed manufacturers that the association is an effective force for change and can offer real help for their businesses. “My pitch,” he says, “is we’re the most powerful industry association in the country, so how can we make your business successful? How can we help you make money?”

For starters, Myers says, CME can help Canadian manufacturers make the essential shift to higher value-added operations. The days are long gone when companies could simply concentrate on getting the product out the door. “The business today is how do you provide a solution for your customers and what value is there in that?” he says. “That opens the door to things like customized design and engineering, customer service, financing, the management of knowledge, and the development of new technology and applications.”

In many ways, manufacturers in the Guelph, Kitchener-Waterloo and Cambridge area are leading the way, says Myers. That helps explain why manufacturing employment in the Kitchener-Waterloo-Cambridge area increased from 1995 to 2005. Statistics Canada figures from July show that about 62,000 people in the area work in manufacturing, representing roughly a quarter of the work force. “It’s remarkable how flexible and innovative companies can be in the area,” he says. “These really are companies that are on the cutting edge.”

But manufacturers can’t do it alone, and Myers believes CME is finally getting its message across to federal and provincial governments. He points to some recent successes stemming from the Manufacturing 20/20 report. In February of this year, the House of Commons industry committee published a report on manufacturing “that almost took our recommendations word for word.” And for the first time in 35 years, he notes, the federal budget last March included measures to specifically benefit manufacturing. Finance Minister Jim Flaherty announced a two-year tax write-off for investments in manufacturing and processing equipment.

Myers wants Ottawa to extend the 21-month window for the tax credit (which expires at the end of 2008) to at least five years. He’s also pushing for significant improvements to the research and development tax credit, arguing it should apply to pre-commercial development activity, as well as original research. CME is also calling for an employers’ tax credit covering a company’s investments in training, perhaps applied against employment insurance contributions. “It would be one of the most effective ways,” he says, “of maintaining employment in the sector that we can think of.”

Some local manufacturers believe that Ottawa and the provinces will have to go much further to save the sector. John Wood, the chairman of Guelph-based W.C. Wood, one of the continent’s largest appliance makers, says the current tax structure in Canada encourages manufacturers to produce items or source components offshore. On products brought in from China, he says, manufacturers only pay the six-per-cent GST. But when all taxes are taken into consideration, including property levies, Canada Pension contributions and EI contributions, the tax on the same product made in Canada is more than 17 per cent, Wood contends. He argues that Canada should follow the European model, raising its consumption tax to the 20 per cent level, and lowering all other taxes that discourage the production of goods in Canada. “If the tax content on the product imported into Canada was the same as the tax on the product made in Canada,” he says, “we could compete – absolutely.”

Lower business taxes are also a part of official CME policy, although Myers says a fundamental change to the tax structure is unlikely to happen under a minority government.

Vote-conscious politicians may not be the only stumbling block. As president, Myers may struggle to reach agreement among CME members themselves, says David Wood, the president of W.C. Wood. With about 2,000 member companies, “it’s such a big organization,” he says. “They’ve always had difficulty building consensus around a few issues, and I think that’s going to be Jayson’s biggest challenge.”

Myers takes the helm with a host of strengths in his favour, says his old boss, Perrin Beatty, who is now the president of the Canadian Chamber of Commerce. He describes his successor as “hard working,” “prolific,” “respected” by governments and his peers, and “impossible not to like.” “I don’t know if there’s anyone in Canada who’s better qualified for the job,” says Beatty, who still remembers how the young Myers’s intelligence stood out when he used to visit Centre Wellington District High School as a young MP. “He’s someone who can certainly hit the ground running.” But he’ll have to work hard, says Beatty, to keep manufacturing issues on the political and public radar screens.

As the point man for the prosperity of Canadian manufacturing, Myers faces a formidable task. No one would question the sector’s continuing importance. In terms of employment alone, it accounts for 2 million jobs in Canada, half of them in Ontario. Myers concedes the industry is at risk, but says he remains optimistic about the future of manufacturing in Canada. Of course, he’s paid to be. He argues, however, that Alberta’s burgeoning oil sands will offer great opportunities for manufacturers, and international markets are expanding at the rate of about five Canadas a year. Despite the job losses, he adds, Canada still employs more people in manufacturing than it did 10 years ago. “It’s a period of major restructuring and change,” he says. “But I’m excited because I think there are tremendous opportunities to connect companies to the opportunities that are out there.” If Myers can help turn things around, it could end up being one more impressive feat for the kid from Fergus.